“Children are still in the flowering of life, they still have an imagination, a passion for life that is lost on adults [who are] jaded by life’s experience.” 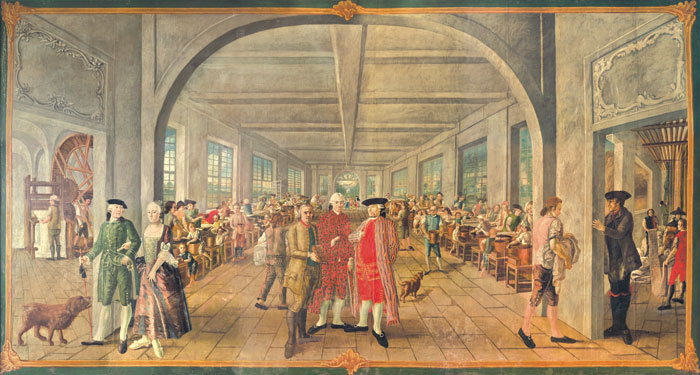 Interior of the Wetter Brothers calico factory in Orange, France, c. 1764
In the background, children and teenagers (likely apprentices) can be seen embroidering, pressing, and dying textiles.  This is one of the best images available of early modern children at work.

My research focuses on the history of early modern and revolutionary France, with particular attention to the history of childhood, youth, education, gender, social reform, state formation, and global expansion.

My first book, Young Subjects: Children, State-Reform, and Social Building in the Eighteenth-Century French World, argues that children were agents of historical change in eighteenth century France. Through their participation in social reform programs from educational institutions, to artisan workshops, and across the French empire as colonists and cultural brokers, children and youth occupied important positions in the eighteenth-century French state. Fitting with this methodological lens,

my research interests are squarely in the history of childhood and youth. Historians have often overlooked the importance and centrality of children and childhood to the development of the early modern economy, the state, the French Revolution, and in overseas exploration and expansion.

Prior to the nineteenth century, children left few written records of their own, making recovering children’s “voices” difficult. Although historians like Colin Heywood have looked at children’s “ego-documents” meaning diaries, autobiographies, and correspondence to explicate the late 18th-century and 19th-century children’s mentality, these documents were exclusively the product of elite children. Poor children rarely left, if they even created, such documents, making getting at their voices even more challenging for historians. Therefore, my dissertation relies heavily on a number of prescriptive sources including school regulations, schoolmaster’s reports and diaries, and institutional documents. From these documents, children’s experiences and sometimes their voices can be recovered.

Through archival research in nine French archives and two in the United States, my book, Young Subjects: Children, State-Building, and Social Reform in the Eighteenth-Century French World (forthcoming McGill-Queen’s University Press) reconfigures the history of childhood by considering children as actors as well as subjects. This book grows out of my dissertation and uses “childhood” as a central category for historical analysis. My research reveals that social reform was not a strictly top-down process mandated by the state or the nobility. Instead, the local community, including the poor, was actively involved in social reform that addressed local problems while simultaneously helping to centralize the early modern state. In particular, social reform hinged on poor children’s compliance and defiance in educational programs in charity schools, hospitals, and orphanages. These educational institutions were created, supported, and established by members of the nobility, but their success was impossible without the cooperation and participation of both poor parents and poor children. Embedded within these educational institutions were complex relationships that intertwined children with commerce, work, subjecthood, state formation, and Catholic morality. Unpacking these networks and relationships, I demonstrate children played fundamental, active roles in society, politics, and economics. As key sources of labor, as future taxpayers, as potential criminals, as prospective colonial subjects, and as future parents, children were a central focus for civic, religious, and economic stakeholders as well as their own families.

These educational programs attempted to create a new generation of loyal, industrious workers. Children’s actions were essential to achieving this goal. By examining official school records, class lists, schoolmasters’ reports and journals, school regulations, worksheets, and records for admission, Young Subjects does much to reveal the day-to-day lives of early modern charity schoolchildren. Although historians have acknowledged the existence of charity schools in educational historiography since the 1970s, there has been no systematic study of charity schools. Young Subjects provides clear insight into how the schools operated and what children would have done on a daily basis, greatly widening our understanding of early modern pedagogy and childhood experience.

Young Subjects examines children and educational institutions in urban centers such as Lyon and Paris as well as colonial children in Louisiana, Québec, Siam, and the Ottoman Empire. Although metropolitan children had markedly different experiences from colonial children due to their geography, the expectations placed on these children and their roles in society were similar. With such a large geographical scope, Young Subjects argues that whether in the colonies, in the metropolitan cities, in the workshops, in the Church, or in the home, children were a crux of French imperial strategy. The inclusion of Asia breaks with traditional French colonial historiography to consider the early modern empire not only as a movement of western expansion, but also as one that was simultaneously moving eastward. Young Subjects therefore places children in a wide early modern global context.

My next project pursues my core interests in the history of childhood, education, social reform, and colonial expansion. “Little Republicans: Youth Inculcation and Experience in the French Revolution” will examine the history of youth experience and inculcation from 1789 to 1815. This project draws heavily on the archives of the Comité de l’Instruction Publique and other revolutionary committees that discussed the importance of education and inculcation as “keys” to the continued success of the early French Republic. “Little Republicans” will build on Young Subjects to consider this pivotal period in the history of childhood and youth.

My book projects all reframe our explanations of how the early modern family, economy, state, Church, and community developed throughout the early modern era. Once on the periphery of history, my research places children at the nexus of social reform and change.